Direct-Field Acoustic Testing, or DFAT, is a technique used for acoustic testing of aerospace structures by subjecting them to sound waves created by an array of acoustic drivers.[1] The method uses electro-dynamic acoustic speakers, arranged around the test article to provide a uniform, well-controlled, direct sound field at the surface of the unit under test. The system employs high capability acoustic drivers, powerful audio amplifiers, a narrow-band multiple-input-multiple-output (MIMO) controller and precision laboratory microphones to produce an acoustic environment that can simulate a helicopter, aircraft, jet engine or launch vehicle sound pressure field. A high level system is capable of overall sound pressure levels in the 125–147 dB for more than one minute over a frequency range from 25 Hz to 10 kHz.

A direct field is generated by audio drivers arranged to encircle the test article. Two different control schemes can be used to perform a direct field test. One method, known as single-input-single-output or SISO, uses a single drive signal to all acoustic drivers with multiple control microphones averaged to produce the control measurement. This method will produce a set of correlated plane waves that may combine to produce large magnitude variations creating local fluctuations on the test article surface. Magnitude variations as much as +/−12dB can be experienced. The second method, known as MIMO, uses multiple independent drive signals to control multiple independent microphone locations. This method produces a more uncorrelated field that is much more uniform than the SISO field. Magnitude variations in the range of +/-3dB are typical when using MIMO control.

The technique uses normal incident plane waves in a shaped spectrum of acoustic noise to impact directly on all exposed test article surfaces without external boundary reflections. Depending on the geometry of the test article this could produce magnitude variations on surfaces due to phasing differences between the plane waves. In the case of large surface area, low mass density test articles the phasing difference may excite primary structure modes in a different way than more conventional reverberant-field testing. This fundamental difference and its impact on the structure must be weighed against the advantages of the DFAT method.

An advantage of DFAT testing over reverberant testing is the portability of the DFAT system. This allows the test equipment to be transported to any location, setup, calibrated, used to perform a High Intensity Acoustic Test and then removed from the test site. The entire process from load-in to load-out can be accomplished in no more than 4 days for a large satellite or similar aerospace structure. The test system uses a “building block” approach to form combinations of equipment to satisfy the environmental requirements. Systems typically include 500 plus speakers, 2 million plus watts of amplification, at least 8 to 16 control microphones, and a closed-loop MIMO acoustic control and data acquisition system. The mobility and “building block” approach allows this method to be tailored for each application and to provide a more timely and cost effective test solution. This method can also be useful for testing articles that are too large to fit inside a traditional acoustic reverberant chamber.

This paper discusses the results from Direct Field Acoustic Tests (DFAT™) performed at MSI DFAT to evaluate how effectively nearly diffuse (low coherence) and non-diffuse (high coherence) acoustic fields, using MIMO andMISO control, excite the structural resonances of a test article. The criteria used is to compare the frequency of resonances excited by the resulting acoustic fields to what Modal Analysis predicts the modes of vibration, their natural frequencies, and damping to be. Test results from using the various acoustic fields created by DFAT™ to excite the test article (test panel), in the form of PSDs obtained from accelerometers mounted on the test panel are analyzed. This analysis is used to determine the relative ability of the various acoustic fields to properly excite test articles by examining how well the resonances shown by the PSDs match the damped resonant frequencies predicted by Modal Analysis. 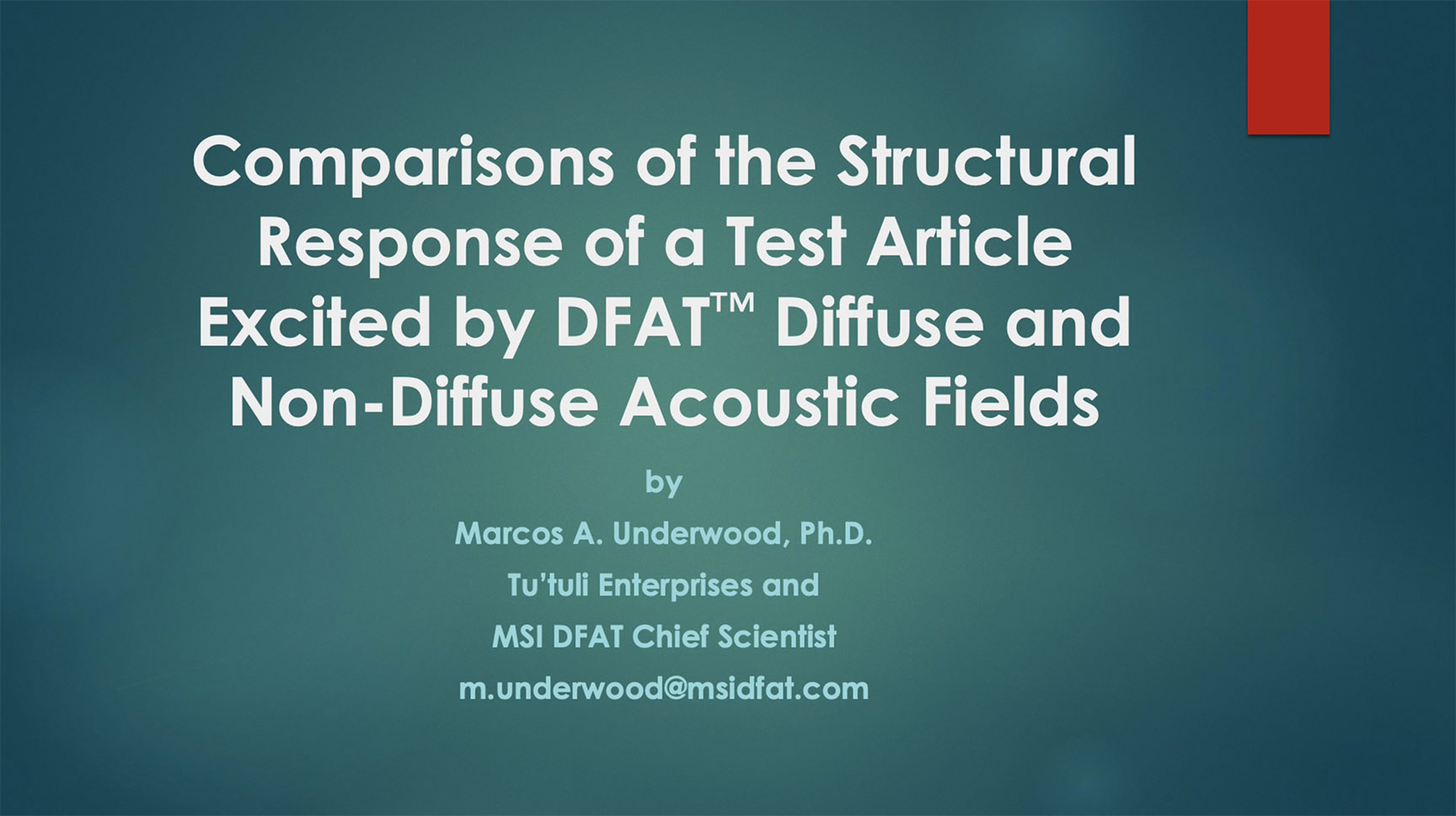 The paper presents a new method for vibration testing of articles such as satellites, aerospace subsystems, transportation subsystems, civil structures, or articles whose reliability in operation may be evaluated using either mechanical or acoustic vibration testing. The method can be used for direct field or reverberant acoustic test facility testing (acoustic) systems or multiple-exciter (mechanical) testing systems to perform vibration testing. The method improves the ability of Multiple-Input-Multiple- Output (MIMO) acoustic testing systems to create diffuse or other types of acoustic fields and MIMO mechanical testing systems to produce vibration responses conforming to an initial reference Spectral Density Matrix (SDM) specification in the least mean-square error (LMSE) sense. It provides an updated positive definite or semi-definite reference SDM that enables such tests to run with less error, using minimum required drive power, as a function of the initial definition of the reference SDM, by modifying its coherence and phase off-diagonal terms, to approximate initially defined off-diagonal terms in the LMSE sense, but maintaining its initially defined diagonal terms exactly, while accounting for physical limitations existing in the overall MIMO testing system. 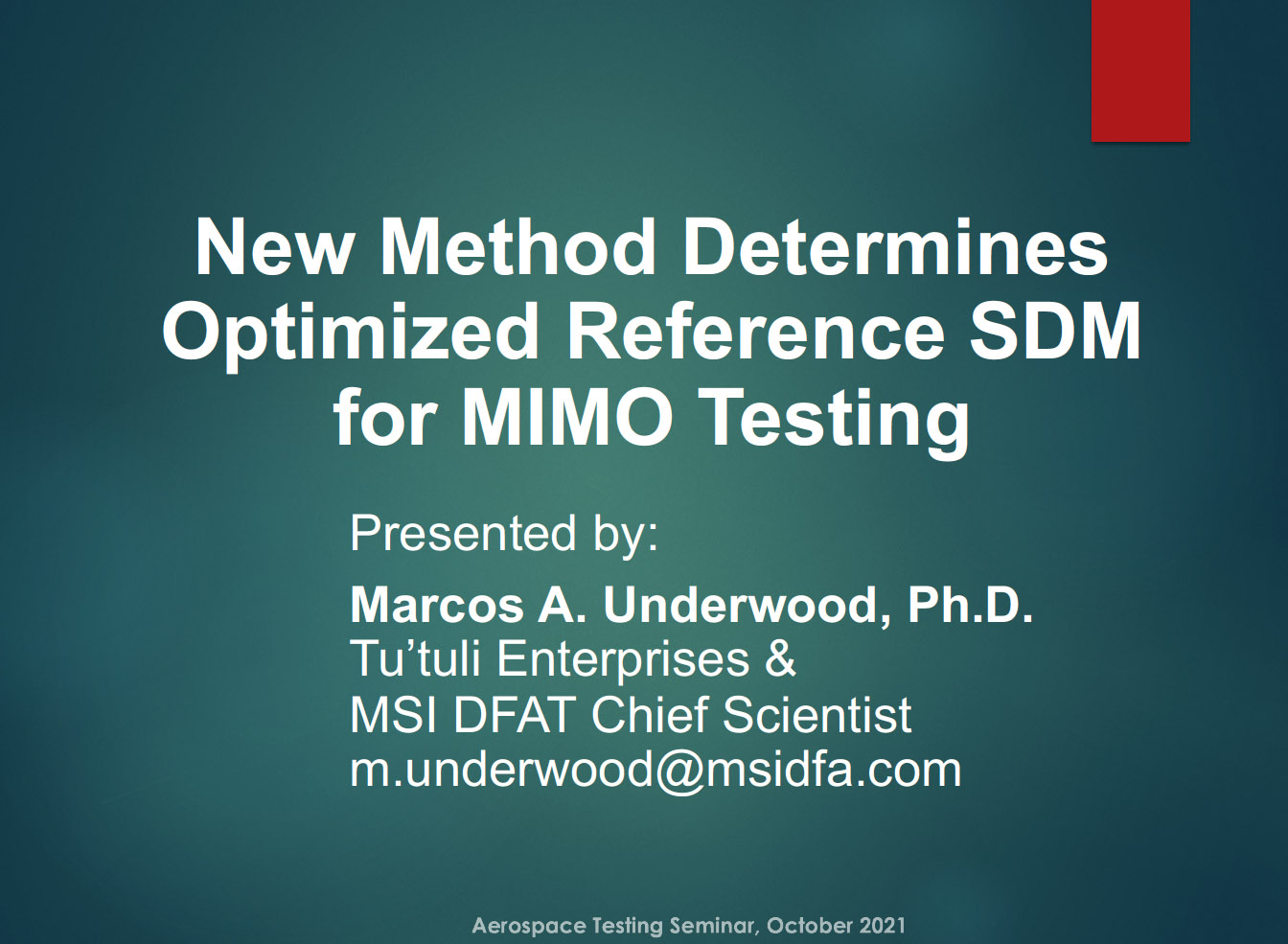